I’m still exploring reactive programming world and RxJava library. Recently, I’ve migrated a few of my open-source libraries from RxJava1 to RxJava2 and written yet another project in RxJava2 from the beginning. Nevertheless, I’m still learning this library and its concept. It’s very wide topic. In RxJava1 we simply had one reactive data type called Observable. In RxJava2, we have more data types like Observable, Flowable, Single, Maybe & Completable. In this article, I’ll briefly explain their purpose and tell you when to use which. The general idea behind these types is code semantics. We should tell consumer of our code, what he or she can expect from our API. Introducing more reactive data types can increase readability and stability of our code base.

Observable is basically the same Reactive type, we had in RxJava1. It doesn’t have backpressure support. We should use Observable, when:

Flowable type has very similar semantics to Observable. We can operate on Flowable streams with map, flatmap, filter, etc. in the same way as on the Observable type. The main difference is backpressure support. We should use Flowable when we are:

To learn more, read note about Observable vs. Flowable on wiki of RxJava2 on GitHub.

Single reactive type has been redesigned from scratch in RxJava 2. It’s designed to handle just one event in an asynchronous manner. Good application of this type is single HTTP request when we expect just one response or error and nothing else. It can emit on onSuccess (single value) or onError event (error).

Maybe represents a deferred computation and emission of a maybe value or exception. Maybe is a wrapper around an operation/event that may have either:

Just take a look at the scheme. The interface of the main consumer of this type have the following methods: onSuccess, onError, onComplete. Conceptually, Maybe is a union of Single and Completable providing the means to capture an emission pattern where there could be 0 or 1 item or an error signaled by some reactive source. 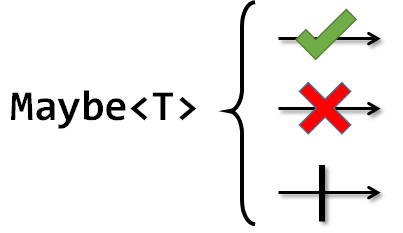 Completable type can be used when we have an Observable that we don’t care about the value resulted from the operation (result is void). It handles only onComplete and onError events. Conceptually, Maybe is a union of Single and Completable providing the means to capture an emission pattern where there could be 0 or 1 item or an error signalled by some reactive source. Read more about Maybe type on RxJava wiki.

As we can see, RxJava2 gives us new types, which can help explain our intentions more clearly. We can adjust concrete type to the specific situation. In addition, we can use backpressure for the data sources, which emit a lot of elements to make our projects more robust and stable. Last, but not least RxJava2 is compatible with Reactive Streams API, which is going to be part of the Java 9 specification.